Location Gulfito our last port in Costa Rica. As I reflect on our time in this green fertile country filled with monkeys, macaws, agoutis and furious rain, I wanted to share Poppy's (Tim's Dad) words because it details one of the benefits of boat life.

Poppy and Memaw -- our affectionate grandparent names -- met us in Playa Hermosa in Northern Costa Rica where they had to practically swim to Kamaya. We journeyed together to Monteverde rain forest, lounged in the hot springs near Volcano Arenal and then sailed more than one hundred miles to Punta Arenas, an old port town in the center of the country. I was a little nervous about having my in-laws visit. Nervous not because of personality conflicts but because Tim has a habit of pushing his Dad to do extreme things, like ski black diamond runs at Snowbird, Utah or swing through the rain forest on a tarzan swing and I wanted to make sure that Poppy who will turn 80 this summer returned home in one piece. We succeeded beyond expectations.

Dear Tim, Ruth, Maya and Kai,
When Moni and I arrived 10 days ago for our visit with you aboard Kamaya, I was dragging, mentally and physically. I was apathetic and in a kind of fog, and I was perpetually fatigued, lacking in energy. I felt old. Now, after our ten days with you, I feel rejuvenated. I am more alert, more focused, more energetic, more curious. I feel more -- well -- as if I've gotten younger. You all and your boat have done this for me. What a charming and inspiring life you have! ...
Love, Poppy

There is something about living at sea, where you are constantly in motion and your surroundings continually change, that might be one of the key ingredients to the Fountain of Youth. If only Ponce de Leon had figured that out!
By Ruth - May 28, 2009 3 comments: 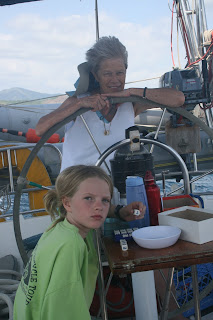 This is MMM (Mom, Moni, Memaw, the “other” grandmother) reporting from Kamaya about 25 miles offshore from Puntarenas, Costa Rica. My husband, Bob, and I have been guests aboard for eight days now and have just a couple more to go.

Because we lived and cruised the Atlantic and Mediterranean with another couple aboard our jointly-owned sailboat for two years back in the early nineties, this sailing experience revives many long-stashed memories. The cautions, like “don’t waste fresh water” and “watch your step on the companionway ladder”, of course, but also the solitude and beauty of a quiet night watch, when the wind fills the sails perfectly and the boat moves along with the stately dignity of Cleopatra’s barge on the Nile. People often ask us if we don’t miss the sailing life since we hung up our deck shoes years ago, and I generally say, “No, I’m too much too grateful to have a solid, steady roof over my head on a stormy night.” But now I know I was wrong. There are many parts of sailing that I will always miss. 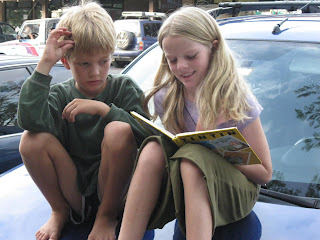 Watching Maya and Kai complete their morning math and writing lessons; read and laugh together again and again over ancient copies of Calvin and Hobbes and Tintin; respond quickly with attention to the appropriate sheets (ropes) when mom or dad says, “Ready to tack”; swim and play on the beach for hours with two girls from the neighboring boat; and almost never complain that there is “nothing” to do, makes me realize that you CAN take kids back to a simpler life. Of course that “simpler” life may not be so simple for the parents who are doing the arranging. Both Ruth and Tim take the time to turn anything they’re doing into a lesson, one that the kids generally seem eager to accept.

“The genny is luffing,” Ruth declares, looking up from a book in which she was apparently lost in until some slight alteration in the sound or feel of the wind through the sails caught her attention. With a turn of the crank and a slight course alteration she goes back to her story, content that we aren’t wasting a single puff of the wind that is coming our way. Sail slowly, if you must, but don’t crank up the motor unless it’s ABSOLUTELY necessary is the Kamaya rule. Both Tim and Ruth are such competent sailors that it’s hard for us to find cause to worry about them, even though they are ferrying our precious grandchildren from here to who-knows-where.

Now, as Kamaya sails on to further ports of call and we head back to our solid home in Virginia, we have a much clearer picture of what our grandchildren are likely to be doing each day. There may actually be a sensible upper age limit for this kind of adventure which we have just exceeded, but we’re awfully glad to have had this peek into their life at sea.

Parting Shot: Poppy holding up our recent catch - an Albacore Tuna, breakfast, lunch and dinner for the next few days. 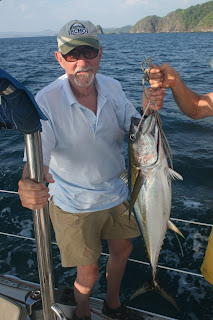 Trying to be an Epiphyte 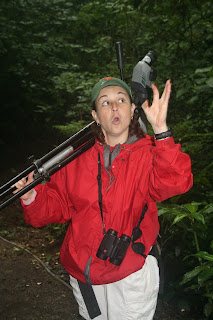 “An epiphyte is a way of life,” explained our naturalist guide, Maria as she pointed out the bromeliads in Costa Rica’s Monteverde Rain Forest. She continued to tell us that an epiphyte lives on a host, usually a tree, and doesn’t take any of the nutrients from the tree but just hangs out together, collecting water and making oxygen. The epiphyte is like the good neighbor, who plans the block parties and always has cookies for the kids.

In contrast, the parasite nibbles away at the host's nutrients, often damaging its existence, more like the nasty noisy pesty neighbor who has loud parties, steals your water to mow his lawn or builds a house that blocks your view. You know the one that you can't stand and want to scratch away.

Walking through the lush rainforest, Maria whistled to different birds. She sounded just like the feather friends (epiphytes?) and they called back to her, hoping she would fly through the air with them. She fooled an exquisite shimmering green and coral red Quetzal bird with its three foot long tail, and we are now amidst the privileged folks who know true beauty.

But as I inhaled the thick oxygen of the rain forest, I started thinking: isn't man more of a parasite rather than epiphyte? Shouldn’t we stop being pesty parasites that destroy our host, the earth? Shouldn’t we hang out and behave more like the epiphytes? In a sense, life on the boat where we produce our own electricity with our solar panels, make water from the ocean and move with the wind is closer to being an epiphyte than a parasite. Maybe that's a good excuse for our adventure in lieu of spending the year as a gas guzzling parasite.

Oh, maybe I have been inhaling too much oxygen. After all I've been living on land for the past few days in the rain forest where forty percent of the world’s oxygen is produced. I've also been whizzing through the thick trees with Poppy, my 79 year old father-in-law, on the canopy ziplines. 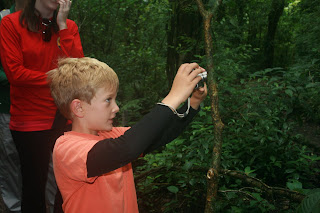 Here's Memaw, Tim's mom, and Tim looking at a bird. Notice their expressions -- I think they're on the verge of becoming epiphytes or maybe they see a UFO: 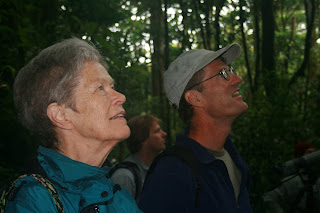 And biologist Maya wanted to see first hand so she crawled into a strangler fig tree that started out as an epiphyte, but eventually took over its host. Is that a message about what happens when someone is too controlling. 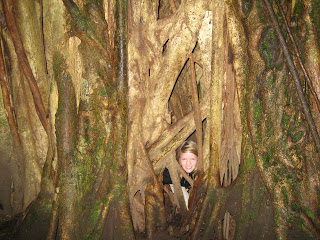 All in all, the cool rainy rain forest with its epiphytes and parasites and thick canopy of trees is an amazing place.

Parting Shot: Maya swinging through the jungle with her friends the howler monkeys. 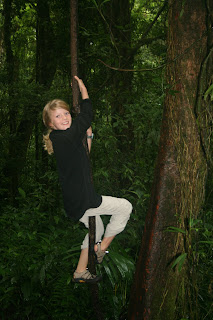 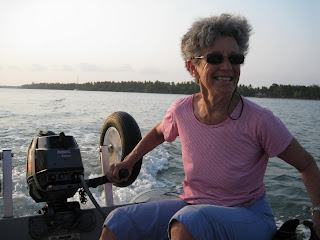 When Oma took a shower at the marina bathroom in San Juan del Sur, Nicaragua, put on her same smelly clothes and exclaimed, “I feel so clean,” I knew she had become a true cruiser. Oma recently spent 17 days with us, joining us on our journey out of El Salvador to Nicaragua with a stop in Honduras. Not only did she see three countries, swim in the crater of a volcano, sail the overnight watches, drive the dinghy, and play continuously with Maya and Kai, but she also got a dose of life on Kamaya.

She says breakfast was her favorite time and in some ways it might signify one of the biggest changes of boat life versus our land life. Back home in Hood River, mornings were rushed. Mornings were my least favorite time of the day. Tim usually left the house at 6:30 to teach and that would leave me to lure Maya out of bed and to school by 7:30. I usually let her sleep as long as possible and that was probably a mistake as then I would hand her an English muffin with peanut butter for her to eat in the ten-minute car ride to Mosier. She was usually late for school despite our many futile attempts to change. She even went to bed wearing clothes, but her night owl habits continued to make mornings challenging.

After leaving Maya at school, I would drive back home and get Kai up and to school by 9:00 o’clock. He had a more leisurely morning, including a fifteen minute scenic drive through the countryside to New Vision School. For me, mornings meant lots of driving, rushing, and going back and forth and little time for a good relaxed breakfast.

In contrast, boat life for Maya and Kai means that they usually wake up when they have finished sleeping. Kai opens his olive eyes around 8:00 in the morning. He routinely rolls out of his bunk, walks up the companionway, goes outside, pees overboard (something he and Tim relish about boat life) and then plunks himself back into the main salon and announces that he’s hungry. Sometimes he claims he’s starving. Maya usually stays in bed and reads her book before her stomach starts to grumble. Then she leaps out of bed and makes her way -- a whole ten feet -- to the breakfast table.

Breakfast is a slow affair. When we’re not at sea, we gather around the main salon, talk about whatever is on our minds, play a quick game of boggle, yachtzee or cards. I make crepes, oatmeal, sourdough pancakes or Tim prepares French toast or egg in the holes. Maya likes her eggs firm and Kai likes them runny. 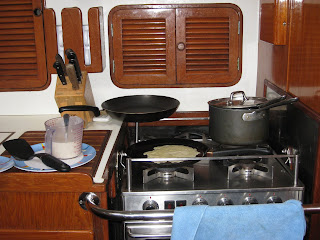 “It’s always a Sunday breakfast!” Oma remarks.
Boat school starts around 9:00 and I don’t have to shuttle the kids. 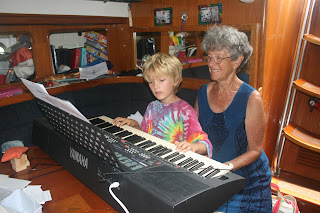