We took a tricycle (a big three wheeled bike connected to a square basket with a seat in the back) to a school that had the one and only Galapagos tortoise that was not in the Galapagos but lived here in Bahia de Caraquez.

As we got to the gate it was shut. There were a few people around. We asked them how to get in. They tried to help us in but the door was locked so they told us to go talk to the person across the street in the “tienda,” that’s Spanish for store.

Ruth found the caretaker and he unlocked the gate. He led us through the garden then finally we found Miguelito, the Galapagos tortoise. As we got closer to the tortoise I asked him if I could get on him, he said yes. I climbed on top of Miguelito and sat on his hard thick shell. He started to move forward slowly and he was taking me for a ride! 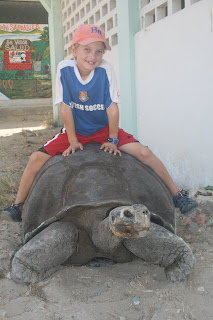 Ruth asked the man how old Miguelito was and he told us that Miguelito just celebrated his 100th birthday! Wow, almost as old as my great -grandmother Anita. He said the tortoise is actually pretty young since many Galapagos turtles live to be 250 years old! As we sat there for a while in awe of this old creature, we wondered whether he was thirsty? We gave the man our water bottle and he poured water down Miguelito’s nose. Miguelito seemed to love the water and inhaled it through his nose. He has two big holes in his nose. The holes are about as wide as a pencil. 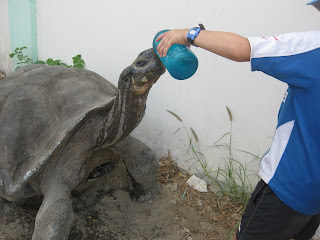 Then we went back to the boat. A few days later I went with Ruth and Maya to a Columbus Day parade only they don't really celebrate Columbus but they celebrate people from all over the world. We rode our unicycles in the parade. Afterwards, we went to visit Miguelito again and again and again.

Kamaya skimmed across the long island known as Isla de Cañas, Panama. It is a long island which, at first sight, may look like part of the mainland and it's known for its turtles, who come through the gigantic surf to lay eggs. The species of turtles most commonly found here are the Olive Ridleys.

As I stared at the surf from the dinghy, I wondered how the Olive Ridleys managed to do this three times a month during the nesting season. Once the wheels were down on our dinghy, the dinghy lurched forward and went to depth enough to stand. Everyone got out, a few seconds later a big wave came and nearly flipped the dinghy over! At least, it got a few gallons of water inside. We bailed out the water and then changed into dry clothes. I wondered if we'd see any turtles.

We walked along the beach for at least a mile. There was nothing, no sign of turtles. Maybe tonight wasn't a good night, what if we wouldn't see anything?
Finally we saw a land mark signifying the beginning or the end of the reserve. there was someone sitting at the landmark. But we hadn't noticed that yet, for we heard the sound of churning sand! A turtle! Just then the high pitched whine of my brother Kai broke the tranquility and beauty of the turtle scene. He kept screaming, "Let's go back now." We hissed back to him to stop yelling and that there was a turtle coming up to nest. It took a little time to get the message across about the turtle, but finally he quieted down.

What he saw was amazing. Her larger front fins were shoveling and propelling her body across the sand, when I looked back, the tracks of the sea dweller went back a long way, she had come far from the sea. 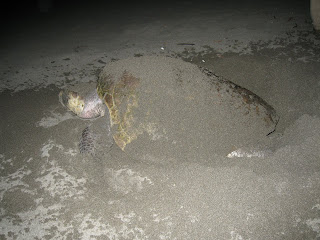 By now she had made it parallel to the post, which we had just noticed and we went over to see what was there. This proved to be good, for there was a person leaning against it. She told us that this post marked the line to the reserves and we had been walking in the "non reserves" where the turtles are not protected from poachers. We also learned that she worked with the biologists here, but was not one herself. The Kamaya crew had met some other people who worked like her.

After reporting this new information to everyone else, we noticed the turtle had made some digging progress, she had a half foot and was shoveling out sand with her powerful front flippers. She splattered sand everywhere. The nest was complete! Now she began laying eggs, one by one. There were some more people looking at her, you could see the tears in her eyes. It reminded me how much alike turtles and humans are, yet she was prehistoric. A marvel of evolution. 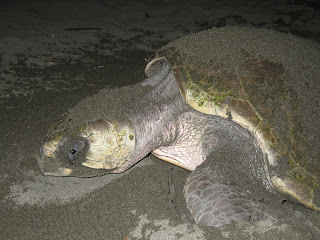 The woman at the pole walked over and dug out the sand layer, in which covered the secret pouch where she was laying. She wanted to show us the eggs which were the size of ping pong balls, coming out one at a time. Making an unheard yet loud noise as they fell into the pouch where the fellow eggs lay. With each egg, the turtles' body heaved with the effort. She layed about thirty eggs, and then turned back to the sea. During the nesting season, she would lay about a hundred eggs total! But that's nothing in comparison to the Leatherback turtle, which can do 450 to 600 eggs total! 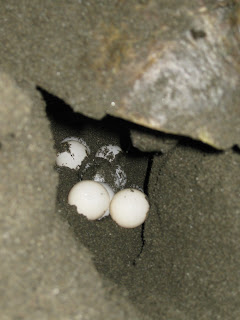 Meanwhile the Olive Ridley had stopped laying eggs and was covering her nest with sand. She walked all the way around the nest, spraying sand everywhere to cover up the eggs. It looked pretty camouflaged. Satisfied, she dragged herself back towards the ocean. About midway there she staggered towards the light of the nearby town, confused. Turtles often mistake city lights for the moon, and travel towards it. We aimed her in the right direction by blocking out the false light with our bodies. She understood and clambered towards the sea on her flippers, plunging into the surf. As she went in, out came another turtle, about to make the same journey as she had, the journey she was born to perform, one after the other. 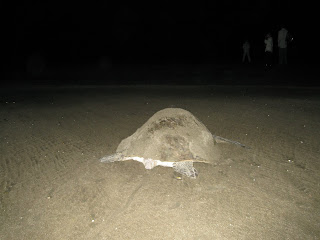 Kai just had an article published in the October issue of Latitudes and Attitudes magazine. It's a great account of our crossing of the Gulf of Tehuantepec. Here's a link to his article.
By Kai - October 03, 2009 4 comments: