Fish out of water

Like a bird without wings, like a snail without a shell, like a teenager without a cell phone, we yanked our poor boat right out of the water. 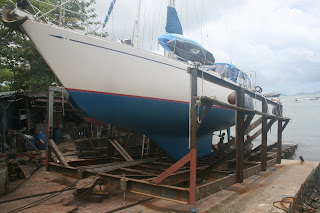 Well it has to be done occasionally and we figured it was time. We'd been spending an inordinate amount of time cleaning off the seaweed, barnacles, crabs, and little sea lice that were creating their own ecosystem on the hull of the boat. Fascinating as the life is, it slows the boat down and can cause more serious problems with watermakers, fridges, and the hull itself. When we'd scrape them from the hull, the creatures would scramble for any shelter they could find. This usually would be us. The sea lice would cling to your body, sometimes stinging or biting like an underwater mosquito. Often I'd pull little crabs out of my ears after cleaning the hull. No, bottom cleaning is not a fun job. I'd much rather change diapers and clean a baby's bottom than clean the boat's bottom. Well there are sailors out there with infants doing both...poor souls...but back to our haulout.

We spent the week before lining up paint and painters. Sailors are a sucker for the promise of not having to clean bottoms. "Oh, this stuff costs 3 times as much, but I won't have to clean the bottom at all for 2 years?...I'll take 4 gallons please." Kaching! There's one like me born every minute.

We found some painters who did a great job and were expensive by local standards, but still cost a fraction of what we spent on paint. Then while we were out of the water, I got to focus on all the other little maintenance items that are hard to do in the water, like changing zincs, cleaning thru-hulls and lubing the prop.

This haulout was more like a railroad train than the usual travelift. In a travelift there's a big tractor with beams and two huge straps they hang under the boat which they lift you out and drive with you in the sling until they set you on your keel with a bunch of little jackstands to keep you from tipping over. This setup, by contrast has a short length of railroad track going down into the water and a railcar that they lower into the water using a system of blocks and cables and a 20 HP electric motor. Then you drive the boat into the car...kind of like pulling into a slip. You tie off securely to both sides, your keel rests on the floor of the car and they pull you up with the elctric motor.

There we sat angled a bit backwards for two days while doing all the work. We even lived on the boat sitting strangely still at this odd angle of repose. The kids had fun going uphill or downhill while walking the length of the boat. But it didnt' feel natural and the boat feels much happier now back in the water. It did turn out to be a good way to haulout. There were no straps or jackstands to mess up the paint, only a few spots on the bottom of the keel that we couldn't paint. Well, those little spots should be all I have to clean for the next two years according to my paint salesman.
By tim - June 21, 2009 2 comments: 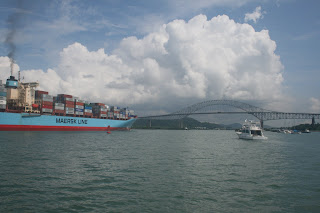 We are on a mooring just a water balloon throw away from the channel into the famous Panama Canal. You know the ... "a man, a plan, a canal ... Panama," one of the Seven Wonders of the World, the remarkable water highway linking the east with the west. The majority of the tankers transiting the canal come from the United States and China, but there are a number of others. We just saw a ship from Cartagena, Columbia pass through. Unfortunately, it left behind a horrid dark plume of smoke in the air.

From our current home, we can see all the tankers make their way under the Bridge of the Americas, the beginning or end of the canal, depending on which way they're heading. These huge ships are the same tankers that I fear encountering at sea. They're the same ships that when I see them on the radar when we're sailing, I panic a little, remembering our close encounter more than 15 years ago when a tanker came within 20 feet of our stern. I'll never forget looking up at its bow towering over us and debating whether it was time to jump off our boat to avoid being crushed. Instead, I gunned the motor veering us to safety. But that was a long time ago. 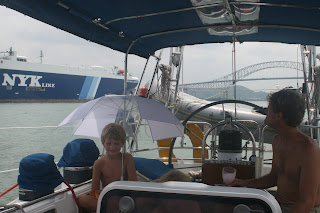 All of the Caribbean bound ships anchor in a line of sorts in Panama Bay while their captains await their call from Flamenco Signal. Between 30 and 40 ships go through the Canal everyday, making a total of about 14,000 per year. It takes the tankers ten hours to pass through the 50 mile highway. Sailboats take two days and overnight at Gatun Lake in the middle of the Canal.

Once given permission to proceed, the ships motor obediently past us making their way through the green and red buoys and under the Bridge of the Americas. That's as far as we can see. From there they go through the first lock, Miraflores. The three water locks, Miraflores, Pedro Miguel and Gatun, serve as staircases, enabling ships to climb and descend a hill of water via gravity. The gravity part occurs in the locks. Think of filling up your bathtub, floating to the top and then getting out at higher level. Sounds simple, the only problem was moving the dirt to construct the pathway. That's where the ingenuity came in as well as the yellow fever, malaria and landslides.

Tankers from the Caribbean side also motor by us. Shortly after the ships pass at all hour of the night, a 20-foot motor boat, zooms by us leaving a huge wake behind and bouncing our boat in many directions. Surprisingly the big tankers don't leave any wake. This small boat brings supplies, and picks up and delivers people before the ship proceeds into the Pacific. The Canal saves a ship traveling from New York to San Francisco 7,872 miles, plus the ship can forego the often brutal seas at the tip of South America.

This scene has been our home for the past four days and it feels like we're on the sidelines of machinery in motion. As I look at the containers full of stuff, I wonder whether most of it is really necessary. Then I think about our recent purchase of expensive paint for our haul-out tomorrow which arrived via a ship from Florida and through the canal. Some of it seems necessary.
By Ruth - June 12, 2009 No comments: 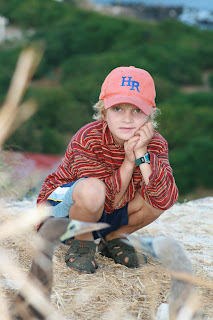 Kai, where are you now?

I’m some place at sea in Panama. We’re sailing all the way to Panama City.

What was the highlight of your visit in Costa Rica?

Seeing the monkeys was my favorite. And the canopy tour where we did the zipline and the tarzan swing. I liked doing that with Poppy.

It’s the beginning of the rainy season. How do you like the rain? How often does it rain? Do you try to catch the rain? 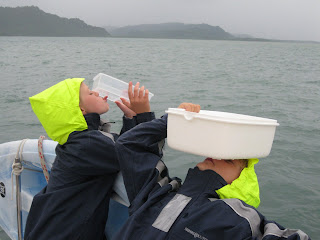 Yes, I like the rain. Sometimes it rains all day, but usually its only a few hours. Maya and I put buckets on our head and catch rainwater. When it rains fast, we catch about one cup in five minutes.


What did you think of night diving in the clear warm water in Isla Secas, Panama?

It was great. It was like diving in the day, but I had a light. I could swim really close to the puffer fish.

How long can you hold your breathe underwater?

Have you caught any fish lately?

Yes, we caught an albacore tuna when we sailed out of Costa Rica.

How did you like sailing Kaela Rose, the sailing dinghy that belongs to our friends Lea Scotia (Trevor, Karissa and Kiera-yeah another kid boat!) who were with us in the northern/western islands of Panama?

It was fun. We sailed it in Isla Secas. It sails well … it’s a sailing dinghy with a jib and it also rows well. I wish we had one. 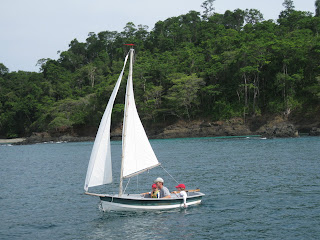 So you’ve been to all of the Central American countries, Guatemala, El Salvador, Nicaragua, Honduras, Costa Rica and now Panama, which one do you prefer?

I don’t know. Maybe Guatemala is my favorite. They have lots of neat art and I really loved the little puppies at Elizabeth’s house in Antigua. They also had good food there.

How do you keep track of the different money in each country?

I have samples of them. There are dollars in El Salvador, Limperas in Honduras, Colones in Costa Rica, Cordobas in Nicaragua and Quetzals in Guatemala. 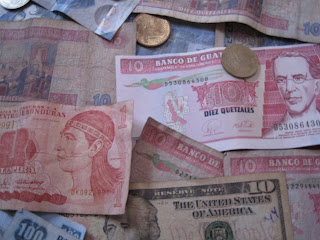 What have you been reading lately?

Something special is happening this Monday, June 8th. I forgot what it was, can you tell me?

You forgot? You wouldn’t forget it. You just want me to say it ….. it’s my birthday of course!

Happy Birthday Kai! You're 8 years old and it's such a privilege and a wonder to be your mom and have you with us on our adventure. I remember our trepidation as we sailed out the Golden Gate Bridge in September. We were worried that you would be seasick, and we kept saying that if you didn't like sailing, Oma would come get you. You overcame seasickness fast and are now talking about crossing the Pacific Ocean. Not only can you sail and understand all the complicated electronics, but you have also become a talented musician, unicyclist and swimmer. You can hold your breath underwater for such a long time. You read constantly, love being read to and you have a heart of gold -- especially if you're playing bridge when hearts are important (are they important in bridge?). I need to watch out when you have the squirt gun...as I may get wet. Seriously, you are someone who everyone would want on board a boat or in any demanding situation as your calmness,intelligence and strength (remember when you started the engine on the dinghy when I couldn't?) is a huge asset.
By Ruth - June 08, 2009 5 comments: