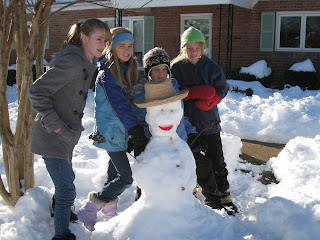 Happy New Years to everyone! For the sailors, let's hope this year brings smooth waters, stellar sunsets, great adventures and dolphins to your bow. To those living on land, we wish you a wonderful year of peace, health, good food, less carbon use and wisdom. Lots of love from the Kamaya crew.

Wait ... what's up with the snowman? You might be thinking ... last time we were en route to Panama and now we're playing in the snow ... well, last week we flew up to McLean, Virginia for the holidays. Kamaya is moored right outside the Panama Canal patiently waiting to set sail again. Soon we'll be heading west to explore the Perlas Islands and then to the Galapagos.
By Ruth - December 31, 2009 2 comments:

When sailing from Ecuador to Panama, most sailors avoid Colombia, for fear of pirates, drug dealers and guerrillas, but we like to live dangerously. Just kidding, there are some safe places to visit along the way. Eric and Sherrell on the boat Sarana wrote an online guide to cruising Columbia, and suggested stopping at Isla Gorgona, located 35 miles from the Pacific Coast of Columbia and so named by the Spanish conquistador, Francisco Pizarro who, when he visited the island in the early 1500s lost two of his crew from snake bites. That experience reminded him of the Greek Gorgon or Medusa, the frightening woman with snakes in her hair, and thus the island's name. 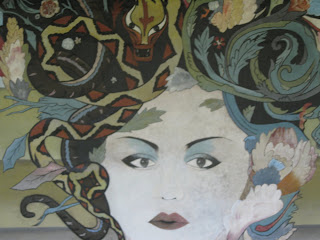 So at 4:00 am on Saturday morning with the full moon lighting our path, we grabbed one of the three moorings in front of the island full of snakes.

We were pleasantly surprised to find that Isla Gorgona also has a fine restaurant, hotel, swimming pool and tour guides. Visitors are not allowed to wander the lush forest without a guide. Remember this island has poisonous snakes.

But the snakes didn't stop us. We were looking for the famous blue lizard, Anolis gorgonae, only found on this island. 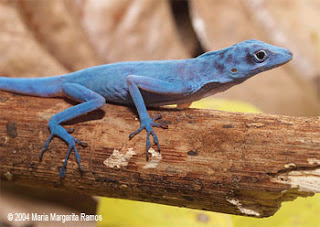 (We never saw the elusive and rare blue lizard but I was able to borrow a photograph from Maria Margarita Ramos, a researcher from Princeton University.)

Instead, we did find the Basilisk or Jesus Christ Lizard which walks on water and is very fun to watch as it scurries on top of ponds. 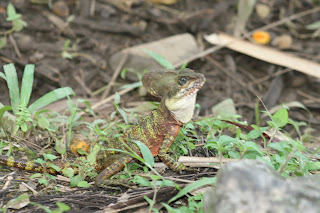 We found many white-faced capuchin monkeys who didn't seemed troubled by the snakes and loved eating the orange seeds from the palm tree. 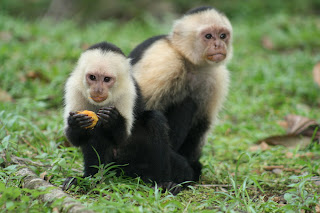 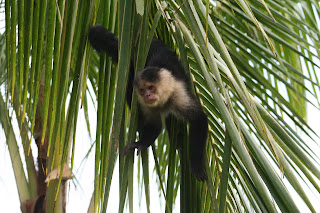 Early Sunday morning, we rented rubber boots and took an escorted walk on the lush island. The rubber boots are needed for protection from snakes and also to maneuver the muddy paths. One of the first things we saw on the path was a boa constrictor. I didn't get a great picture since I was a little nervous -- silly me, boa's are harmless! 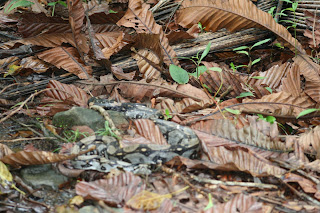 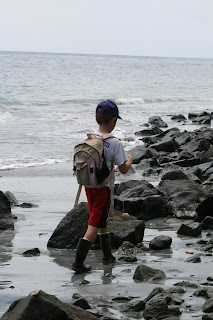 In the afternoon, we took a look at the island's sad past. From 1965 until 1984, the island served as the Alcatraz of Colombia, a maximum security prison. Our guide, Ranulpho, showed us around the remnants of the prison which is overgrown with trees and instead of prisoners, the rowdy monkeys frequent the grounds and bang on the walls. As Ranulpho told us about the horrible lives the prisoners led, the monkeys hollered from above. We learned about one prisoner who had managed to build a raft and escape by sea 50 miles to Buenaaventura. That same prisoner - at the time a freeman -- went to the bar, got a little drunk and bragged about his feat. Someone called the authorities in Gorgona and they came out and brought him back to the prison. I guess he learned the lesson of keeping one's mouth closed. 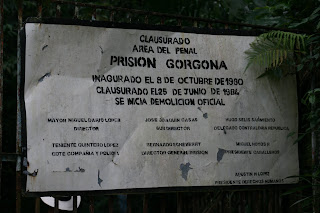 We planned on leaving early the next morning, but Luis, a biologist on the island dissuaded us. He told us that we could watch him tag turtles. They were going to catch them at eight in the evening when the turtles go to sleep, bring them on shore and tag them. The previous month, they had used GPS to tag and study the turtles, but they lacked the money for more satellite. This was Colombia's first ever sea turtle tacking project.

Look closely as there's a green turtle in the photo. The biologists put a towel over the turtle's head so as not to bother her and then they measured her shell, head, fin and even her tail. They also weighed her. This is probably the first or second time the this turtle has been on land. Turtles begin their lives on land and the females only return to lay eggs. 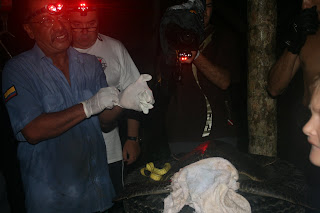 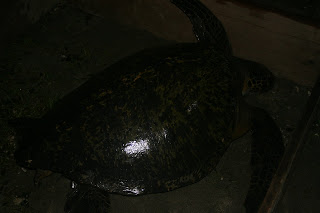 P.S. For any of the sailors reading this entry, contrary to popular belief, the costs to visit the island were reasonable and we did not have to check into the country. They accept credit cards and don't accept dollars. It cost us $5 for the mooring; $15 to enter the island; $1.50 to rent rubber boots; $3 for the hike which included a panga ride return. We splurged $10 for the three course dinner - shrimp, rice, vegetable and dessert. Not bad and well worth the visit.
By Ruth - December 16, 2009 1 comment:

As our days in mainland Ecuador come to an end, I feel both sad and excited: sad to leave Bahia de Caraquez where we’ve been living for the past three months and excited to be sailing again back at sea amongst clean water, dolphins and turtles.

When we arrived in early September almost three months ago, we were ready to kick our heels deep in the sand, escape the rain and lightning that faced us north of the Equator, hone in on our Spanish and become part of the community. Bahia (when you say it in Spanish, don’t pronounce the “h”) was a perfect place to accomplish these goals.

We settled in quickly with a routine for life on land. Maya and Kai attended a local school for one month, we joined the tennis club, and found our favorite lunch places as the 2:00 pm almuerzo/lunch is the most important meal of the day. Most places charge $2.50 for soup, fish and rice and sometimes even a dessert.

Puerto Amistad, the place where we dock our dinghy and take showers, lives up to its name as being a port of friendship. It is here at Puerto Amistad where we recently had Thanksgiving with more than 120 people (we brought Mayflower boats that we made from pineapples) 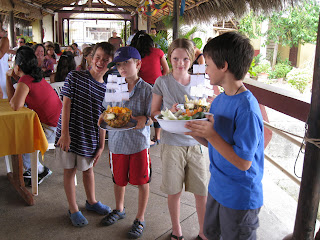 It is where we celebrated Maya’s 10th birthday with classic games of the egg toss, water balloon toss, limbo and more. 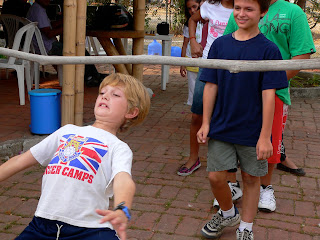 Here at Puerto Amistad, everyone worked together to complete a 2000 piece puzzle. It is here, where we connect to the Internet, have Spanish lessons, eat our shrimp crepes and hamburgers, drink hot chocolate and Pilsener beer, chat with locals and sailors and where Maya and Kai and their buddies Thomas and Patrick from the boat Victoria play for hours on end. 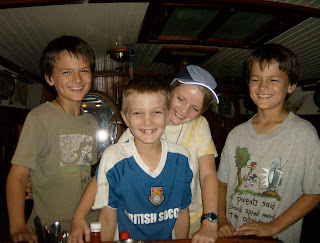 Now it’s time to clean all the dirt off of Kamaya, raise our anchor, sail out of the Rio Chone and back into the Pacific. We're headed back to Panama, then to the states for the holidays and then on to the Galapagos. “Good-bye Bahia” or “so long” as we hope someday to return.

It’s time to say good-bye to our hundred year old friend, Miguelito. We loved feeding you bananas, giving you water that you inhaled through your nostrils and climbing on top of your huge shell. You are historic and amazing! 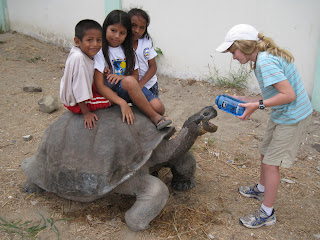 Thank you to Pierre and Kim from Victoria for paving the path for us here in Bahia -- we look forward to sailing west with you and hitting more backhands and volleys on tennis courts somewhere in the near future. Gracias to lovely Margarita for starting my Monday and Wednesday mornings with sun salutations and controlled breathing. Bruce, Olenca and Anita, we hope to see you out on the high seas someday -- keep up the good spelling Anita as next year you can win the Spelling Bee. Montserrat - you have created an impressive Montessori preschool school, one which will teach the younger generation to respect our planet. 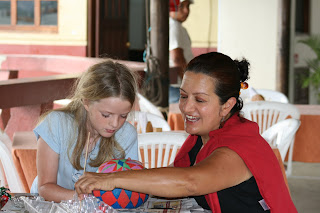 Maye and Trip, thank you for creating a happy home for us at Puerto Amistad. Carlos, keep up your sense of humor and thank you for finding our anchored buried in the muddy river. Isabel and Guillermo from the boat TinTin, we hope you had a wonderful trip to Peru and hopefully we can continue our Spanish/English language exchange in the Galapagos. Henry, Ana and Brianna, we hope your new life in Canoa continues to satisfy you with stunning sunsets and warm friends. Alfredo from Sainanda, we wish you success in curing the monkey who electrocuted himself. We really enjoyed roaming your grounds, watching your peacocks display their feathers, talking and dancing with your parrots and marveling at the sleepy sloths sitting at your dining room table. I’m sorry the government didn’t decide to build a draw bridge so that sailors can live in your peaceful abode. 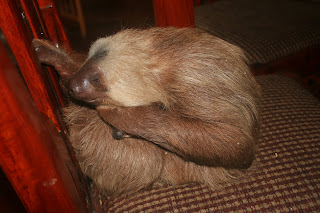 We’ll miss the tricyclists who peddle us around town. We’ve thoroughly enjoyed the tennis club, where Maya earns the prize for most improved. 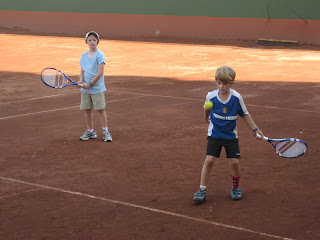 So long to all the merchants in the Mercado selling bananas, tasty pineapples, mangos and granadillas. The fish market took me a few weeks to brave the entrance, but once inside, I was continually amazed by the variety of fish. It seemed like every time I ventured into the market, I saw something new. Once there was even a manta ray on the table.

Thank you Bahia for being a happy home for us. We’ll miss you! 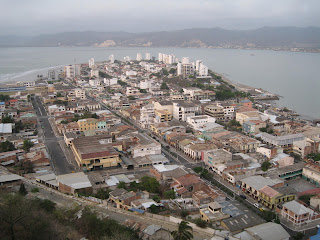