We picked Maya and Kai up after school on Friday in our new but old car with four bikes on the back and headed south to Rotorua. Our local friends cautioned us about Rotorua, calling it "Roto-Vegas" since it is one of the most touristy places in the North Island. But, heck, we're tourists and we wanted to see what all the hype was about. I'd say it was well worth it.

My favorite was seeing the infamous Kiwi bird who used to be all over New Zealand until the rabbits, stoats, possoms and dogs came along. The poor flightless bird couldn't protect itself or its large eggs so its population declined quickly nearly to extinction. Now, there are a number of organizations, like Kiwi Encounter, that are working to save the Kiwi bird. 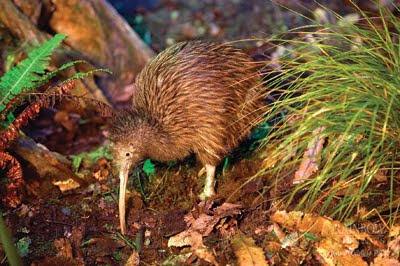 The Kiwi bird is pretty funny and so unusual. First and foremost, the female lays the huge egg (actually she has two ovaries and lays two eggs, but often not at the same time), and the male is in charge of taking care of the egg.

Other funny attributes of the Kiwi bird is that they're more like mammals than birds. Their nostrils are situated at the end of their long beak; they have whiskers like a cat; they have tiny wings, but they can't fly; their feathers are more like fur and they have bone marrow just like humans. They're nocturnal, so we visited the Kiwi Encounter first in the morning to see the baby Kiwis and then at night to watch some of the adults in action. 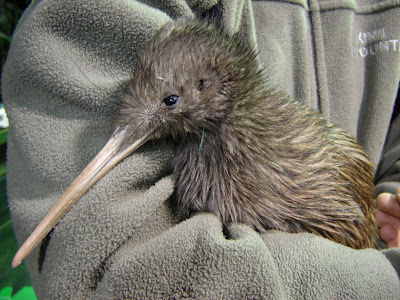 One Kiwi bird named Forest put on a great show at our night visit - she bounced and pounced looking for food and moved her long beak in a comical way. Kiwi birds like to eat Meal Worms which supposedly taste like peanut butter. Yum! 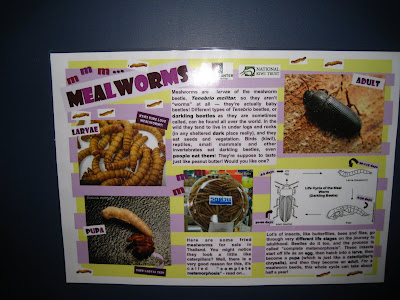 Maya and Kai's favorite activity in Rotorua was the exhilarating luge ride where they drove their own three wheeled cart and zoomed down the concrete track. 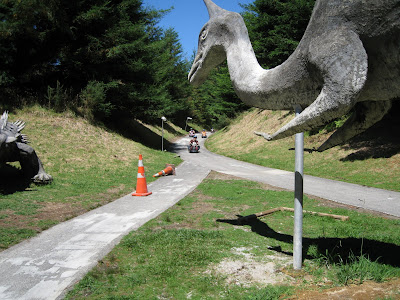 This particular luge was designed and manufactured right in Rotorua and the slogan, "Once is Never Enough," seemed appropriate since the kids asked as soon as we got off the Gondola - we took a gondola up to the luge - when we're planning to go back to Rotorua.

Tim says he liked the mountain biking the best and indeed it was world-class and spectacular amidst the silver ferns and Redwood trees. The trails were well marked and most were one way. 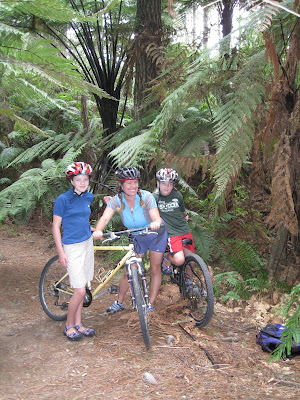 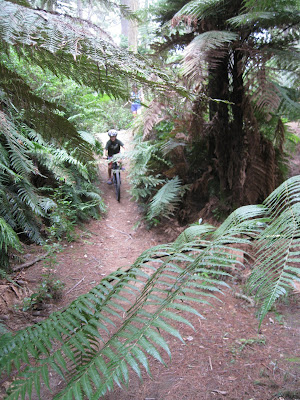 After all this activity, we soaked in the thermal hot pools and then like most working people had to make our way back to the big city Sunday night. But before heading back, we stopped for the second time at one of the best ice cream stores in New Zealand, a place called Lady Jane's Ice Cream Parlour. 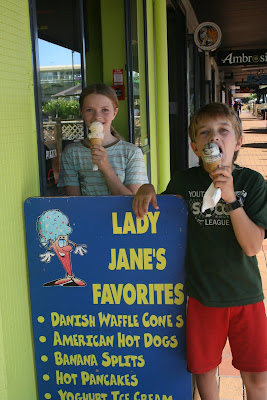 Photos of Kiwi Bird courtesy of Kiwi Encounter at Rainbow Springs
By Ruth - February 13, 2011 No comments:

Ok, we need to talk about the real important things in New Zealand. You might think I'm thinking about the incredible boats surrounding us, like the wild looking winged sail America's Cup 45 that we got to see up close today ... 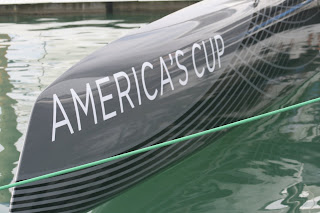 Yes, the AC45 is pretty cool and one of the sailing gurus that I met today told me we were witnessing something revolutionary. Sticking an airplane wing on a sailboat might well be revolutionary ... and yes it's bringing professional sailing to a different level. Moreover, it's even cooler that the boats are being made in Warkworth at a place called Core Builders which is less than an hour from Pier 21, our home at the moment. 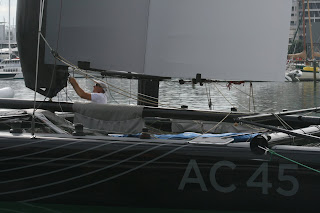 But, Warkworth has something else going for it, 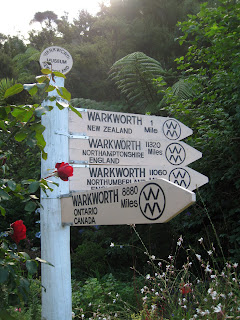 something that's super important here in New Zealand. Something that Captain Cook brought here when he visited in 1773. Something that has four legs and goes bleet .... yes.. you guessed it ...it's sheep. Did you know that there are more sheep than people inhabiting New Zealand? In fact for every person, there are about 12 sheep. 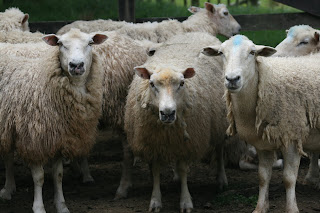 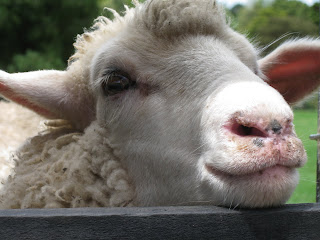 Some of them are even pink. 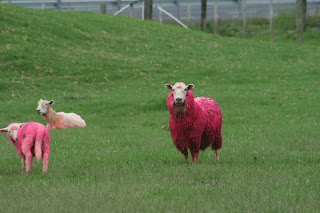 And sometimes they need a haircut. Like this one. 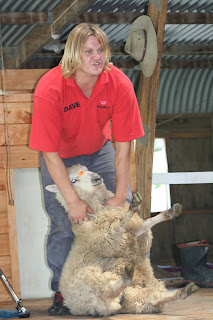 Maya, Kai and I learned how to shear the sheep. It looks easy, but it's a tough work and it's pretty incredible to imagine that one shearer could do the job in 15 seconds. 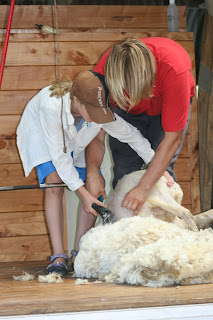 Also living in Warkworth is Joey, the possum. Most Kiwis (that's what we call the New Zealand people) don't think very highly of the possums, and some have even declared an all out war against the possum, but Joey is pretty cute. When we held him, he licked us endlessly and we learned that he also likes to suck on lollies (another Kiwi term for lolly pops). 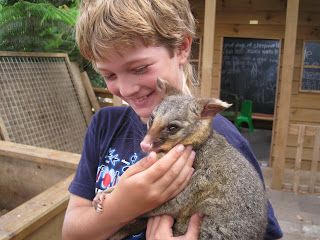 I think Donkey from the movie, Shrek, also has a relative living in Warkworth. He likes to be stroked behind his ears. 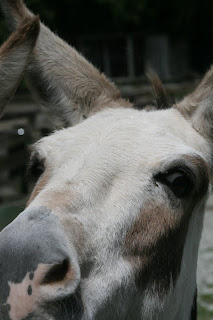 Little Ducky You're the One

Today was one of those beautiful clear days here in Auckland with the sun shining and people out and about on the Viaduct, a part of Auckland's swank waterfront. I picked Maya up from her third day of school and we both biked back home to the boat. Note: Maya is going to school which you'll hear more about in future blogs and I don't know how to drive on the wrong side of the road, so we get around on our bikes.

But back to the story, we were pleasantly surprised to see a big little duckling in the water ... 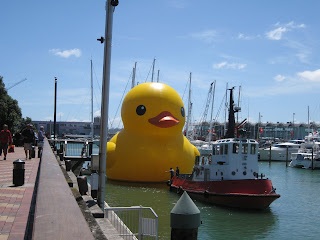 And look who was also examining the duckling! 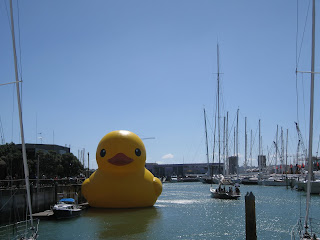 That's one of the old America's Cup boats.

We had another good sighting, something pretty cool ... the New America's Cup 45 catamaran. We couldn't get very close, but from a distance the mainsail looks like it came off straight off an airplane. Apparently, we're going to be seeing more of them in Auckland. The AC 45s are the scaled down version of the America's Cup 72s that will be racing in San Francisco in 2013. How exciting! 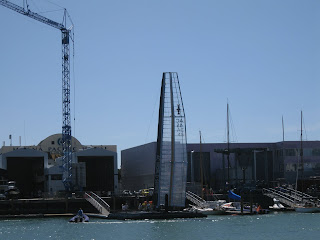 In the meantime ... what was the big little duckling doing on the water? I understand it's been in many other cities around the world.

And what is Kai doing? 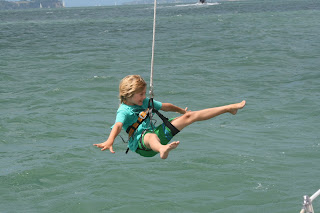