July 11, 2009. Here we are at the airport waiting for our midnight flight from San Francisco to Houston and then from Houston to Panama City where we will join Tim and continue our adventure. We packed a new Jabsco marine toilet, nifty solar devices from the Hood River company, SolLight, Oma’s chocolate chip cookies, cliff bars, spinnaker sheets, zincs (used to avoid corrosion), books, and other necessary items for our boat life. Kamaya, like all boats, is demanding and constantly in need of maintenance and repairs; thus our trip home served also as a chance to stock up.

While we wait for the plane, Maya reads her Warriors book on the Amazon Kindle; Kai plugs in with ear phones listening to his downloaded audiobook, Flyte; and I type with my newly purchased Toshiba mini- computer. According to the salesman at Best Buy, the Toshiba is not as slick as the Gateway, yet the Gateway comes with Vista and no one likes Vista. This Toshiba on the other hand runs Windows XP, weighs three pounds and has nine hours of battery life, so after lots of hemming and hawing, this is my compact new device -- a perfect size for travelling. We leave the Bay Area technologically connected. I even hooked up to Facebook!

Indeed, we are in the electronic age, for better or worse. With it comes a plethora of decisions related to the various products. Now that we have the Kindle and an ipod, we have decisions to make: do we read the book on the Kindle or have it read to us on the ipod? If we opt for the later, then audiobooks is the solution and that requires downloading the book to our computer and then to the ipod. The Kindle will download books on its own wireless connection in the states, but not yet in Panama, then you have other hoops to jump through. Of course, there’s also the option to read a book the old-fashioned way. Decisions!

Arrived in Panama City at one in the afternoon on Monday, July 12th and Tim was anxious to see us. “One month is way too long,” he told us. So now we are back united as a family and back exercising our sea legs. This time Kamaya is anchored at the Brisas de Amador anchorage with a number of other boats that we’ve seen along the way.

There’s Erika, a family of four, sailing on their classic Angelman Ketch which uses the old fashioned wooden hoops to hoist and connect the mainsail to the mast. They have two girls, Lena and Sylvia, who grew up on the boat, first in Oakland, then Ventura and now all over. There’s Pedro the carpenter who lived in La Paz and is sailing his Alden 45 alone all the way south to Chile, the straits of Magellan and beyond. Lea Scotia, a Taswell 42, hosts another family of three with the third being a three year old. They come from Seattle and are trying to decide whether to go through the Canal and into the Caribbean or whether to head south with us to Ecuador. There’s also Bat Wing, a cock-eyed junk rigeed schooner, that we met in Costa Rica. They’ve been sailing between Panama, Costa Rica and Ecuador for the past five years.

And then there’s a flotilla of new boats; some who have just come through the Panama Canal from the Caribbean side; some (mostly French) who are gearing up to cross the South Pacific; and one Polish boat, Luka, who just arrived from a 30-day sail from Easter Island. That was easy for him since the year before Captain Tomek and his Jack Rusell Terrior, sailed 391 days straight around the world without stopping! (See www.soloaroundtheworld.com) We just met a Russian boat with two children 8 months and 3 years old. Both of the children were born on the boat with the help of Doctor Dad.

It feels like we are at the intersection of an urban traffic jam, and we're all aiming in different directions, and stopping here to provision, make repairs and enjoy civilized Panama City with its malls, Chinese food and grocery stores. We’re here for another week getting dental work, yellow fever shots, a new radar dome, and tons of food for our sail to Ecuador.

Since we’ve been gone, Tim befriended Miguel, a young lawyer who wished he had grown up in Alaska with the opportunity to play ice hockey. So instead of playing on ice which would melt in a second in the Panama heat, he plays rollerblade hockey three times a week at a parking lot close to Balboa Yacht Club. He was overjoyed to meet Tim, who he recruited quickly and is now one of the stars on his team.

Miguel keeps busy by incorporating businesses and aiding boats transiting the Canal. He stays away from litigation of any sorts because that area is diseased with corruption. “It’s not how persuasive you are, but bribes that win a case,” he told me disgusted with his country. “It’s deeply imbedded and there’s no way of getting rid of it.”

But that’s what the new President of Panama, Ricardo Martinelli, is attempting to do or so he says. When he took office on July 1st, one of the first things Martinelli’s Anti-Corruption team did was demolish the bathrooms and office at our anchorage. Supposedly, the Columbian owner of the Brisas de Amador, started developing this area without proper authority and with bribes, so Martinelli planted a Panamanian flag on the land with an accompanying sign in black and white stating “Propriedad del Estado” (property of the state). His representatives, have assured the sailors living in the anchorage that they will take care of us. Now, we don’t have to pay the $5.00 a day to use the dinghy dock and we are instructed to not pay anyone else $5.00 a day. When I told Jaime Cohen, the President’s representative that I thought we should pay something he told me not to worry. “In the past, people paid someone they should not have paid, so now to get rid of corruption, it’s best you don’t pay anything to anyone, not even the guards looking after the anchorage.”

So here we are living free in what seems like one of the best places in Panama City, a protected anchorage with a stellar view of the city. There’s a paved path nearby that weaves for miles along the waterfront and the Smithsonian Institute has a research center across the way with sloths, turtles and monkeys. Life sounds good… but I purposely omitted one of our hardest challenges -- the heat and humidity and the mold. Sadly, I just had to throw out our Mexican chocolate that melted and molded in the heat.
By Ruth - July 22, 2009 1 comment: 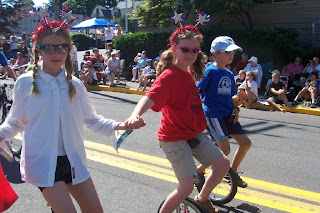 Happy Fourth of July! It's so wonderful to be proud to be American. In celebration, Maya, Kai and their friend Grace rode unicycles in Hood River's classic Fourth of July Parade. People urged them on, excited to see determined kids balancing and moving with one wheel.

Hood River? You might be thinking … wait, I thought you were in Panama!

Well we were and we are, but we took a month break from boat life. Kai, Maya and I flew back to San Francisco and Hood River to test our land legs, check in with family and friends, and prepare for another year on board Kamaya. Right now, everything to me feels like a dream. What's real? If its all a dream, so far it's been pretty good, and I'm not sure I want to wake up.

So as the dream continues .... Sailing plans are written in sand and can easily change with the tide. Our current thought is to hole up in Panama and Ecuador, get fluent in Spanish and involved in the community and then eventually cross over to the Galapagos, Tahiti, Tonga, and New Zealand. That means we'll be out for another year.

People have asked me whether the decision to continue was hard, but truthfully, everything seems to have fallen in place and we weren't ready to turn around. First, ten months on Kamaya went quickly, especially once we figured out how to live together 24/7 and in a small space. When we set out September 6th, I had thought that we would cover more ground, but we've been moving slowly, stopping and exploring along the way. So the idea that we could continue and meet more interesting people, animals and places, enticed us all.

Second, financially, our journey has been much more affordable than Tim and I had anticipated. Living expenses at sea are minimal, especially when we don't venture too far away from the boat. And, fortunately, our tenants in our home in Hood River wanted to continue renting another year making it possible for us to continue.

One year is a long time, especially for a child where time moves at a much better pace, so we promised Kai and Maya that we would go home for a visit. Tim thought we'd be gone only for two weeks, but by the time you factor in the travel expenses and the things we needed to get done, we opted on a month visit. On the plane from Panama City to Houston, Maya remarked about life on the land and she compared our dinghy on Kamaya to a car; our kayaks to bicycles and our boat to a physical home.

For the first few days on land in Sausalito, the kids didn't want to leave Oma and Poppa Nate's house because they could leave their toys out without having to stow them away; they could play with their cousins; they could sleep in beds that didn't move; and they could eat banana bread and ice cream all day long.

Then we made our way north to Hood River, where Maya and Kai have had non-stop play dates. The Gorge is a kid's paradise, especially during the summer with the long warm days and healthy outdoor life. In fact, it's been so much fun that for the first time, the kids questioned our decision to stay away for another year. We've stayed mostly with our friends Sue and Sam who have a magnificent farm with a swimming pond, rabbits, dogs and pigs. In some ways, farm life and being tied to the land is the exact opposite of our boat life. It's all a wonderful dream!
By Ruth - July 06, 2009 1 comment: