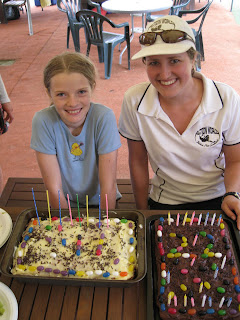 Maya turned 11 on Thursday, November 18th and it just so happened that our new friend Christina turned 22 the day before. Christina works at Action World in Paihia and that's where we celebrated Maya's Birthday Party. We couldn't have asked for a more perfect venue for Maya, our unicyclist.

Here she tried the flying trapeze just like they have in the circus. 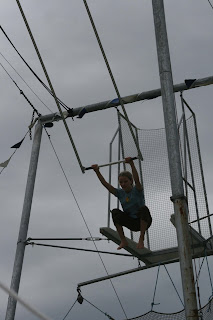 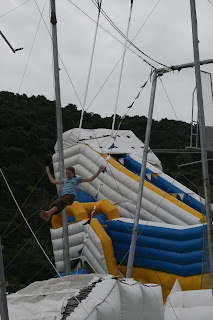 She also mastered the tight rope - (4 meters/12 feet in the air) ... it took a lot of practice but she walked all the way across without falling. 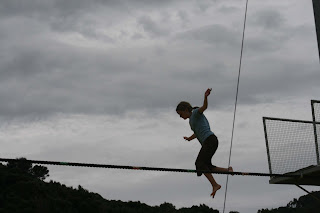 And she flew threw the air on a flying carpet. 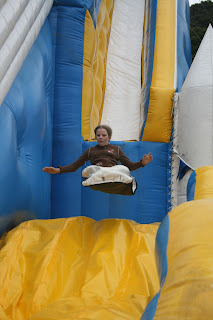 Even the parents had fun on the x-treme slide. Here's a great shot of Christine from Stray Kitty getting some air and notice her hair! 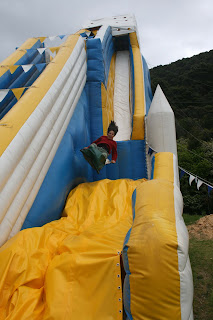 The jousting log was a hit. Dave from Nikita was the king of the log, even battling his wife, Rayann. 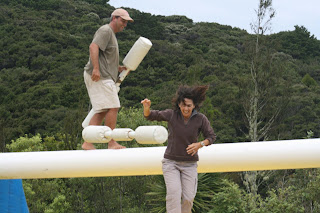 Ondine from MoJo was the Queen of the log. 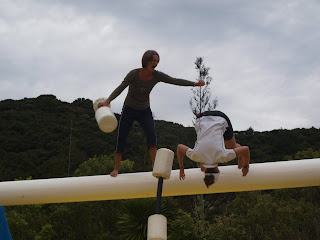 If you are ever in New Zealand and have an urge to swing on the trapeze, we strongly urge you to visit Action World, www.actionworld.co.nz The owners, Frank and Carol Osler, developed a special airbag landing system which allowed us novices to feel like we were ready to join the circus.

Tim might be ready...he received the first Champion certificate for flying like a bird to catch the second bar on the trapeze, walking all the way across the highwire, ringing the bell on the top of the climbing wall and flying over the sissy wall on the jungle swing. Go Tim! 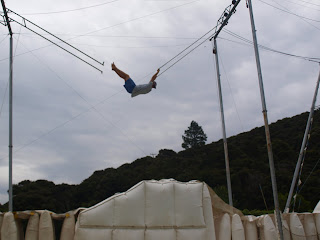 Birthday girl Christina demonstrating her skill on the trapeze. 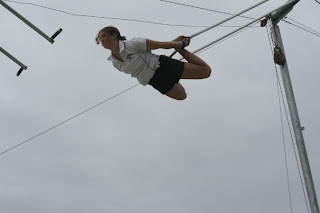 We made it to New Zealand!

Early November when cyclone season officially starts in the South Pacific, most sailboats migrate to safe zones. Some sail to Australia, some to New Zealand and the bold ones bury their boats in sand in Fiji. We chose New Zealand, even though the 1050 mile journey from Tonga can be treacherous.

In fact, it can be such a difficult passage that Jim Corenman warns in his South Pacific primer guide to "avoid getting pasted twice. The problem is that the weather fronts cross New Zealand every 7 or 8 days, but the northern end of the front trails behind as the front moves east. So the fronts are effectively moving north as you head south. The farther south you are the earlier you will see the front and the more boisterous it will be. So take your licks early and try like heck not to get pasted near the end of the trip."

While waiting for a weather window in Nuku’alofa, I started getting nervous about our last big passage. I knew Kamaya can handle strong winds, but it's super unpleasant to beat into 40 knot winds like some of the boats had encountered on their journey. Tim assured me that we wouldn’t get pasted twice.

That last week in October, we were with a fleet of boats also heading to New Zealand. All of us constantly looked at the grib files, chatted about the weather, and waited for New Zealand weather guru Bob McDavitt to advise us when to come south. On October 31st, we received the go ahead. Our window was open, McDavitt emailed us. But he also stated that we need to worry about the low forming off of Australia and must arrive in New Zealand before the 9th of November.

So on Halloween, after a morning of trick-or-treating boat-to-boat (Maya was a witch and Kai was King Arthur), 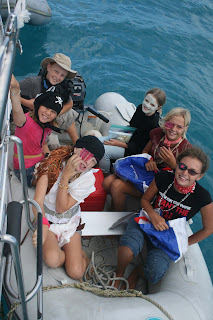 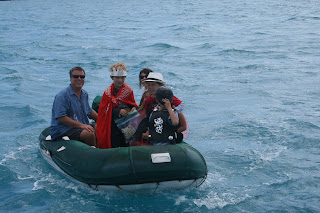 and a game of tug-of-war...Big Mama's was a great place 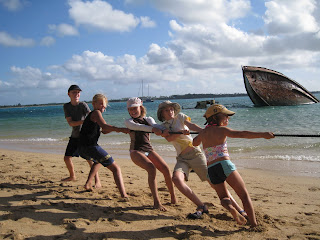 we hauled up our anchor and headed towards Minerva Reef, 275 miles away. The winds were perfect, 10 to 15 knots from the East, as we said good-bye to Tonga.

Two days later at 8 am on November 2nd, just as we were pulling into Minerva Reef, our fishing line went zipppp. We scampered around as usual. Maya and Kai doused the main and furled the jib, I slowed the boat down and Tim doned the fighting belt. Then suddenly the fish went super deep and pulled hard on the line. We fought harder. He fought harder, or so we thought.

When we managed to get the yellow-fin tuna close to the boat, it looked funny. It had a huge bite out of it. It was half eaten by a shark! We were battling a shark! Well, at least the shark shared. 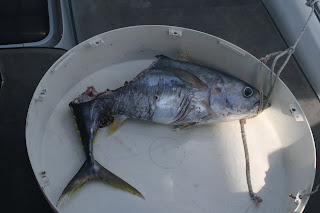 We anchored inside the atoll, enjoyed tuna sushi, the respite from the rolling seas, and snorkelled the pass. Another boat, Shannon, was with us and they said while snorkelling, they saw white-tipped sharks mating. We saw the sharks, but not in the act. We also saw a huge grouper the size of Kai.

Continuing on from Minerva Reef to Opua, New Zealand we had wind in all different directions, but never over 30 knots. In fact, contrary to Jim Corenman’s article, we never got hammered. Poseidon was super kind to us.

At night, the bioluminescence sparkled in the water and the farther south we sailed, the more layers we had to wear. The flying fish continued to whizz through the air. Kai found this unlucky one on our deck. 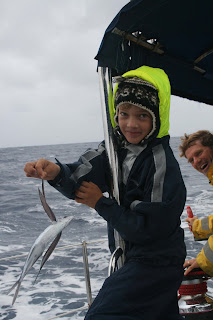 We had one spectacular day flying the spinnaker, another day with little wind that forced us to motorsail for too many hours. The most stunning day happened early Monday morning just after sunrise when I saw land. 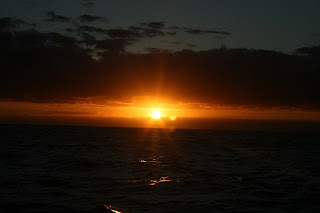 It was a morning I'll always remember and made up for all the sleepless nights at sea. There was a rainbow circling the sky and an albatross with its 8 foot wingspan greeting us. Once the kids woke up, we had dolphins playing on our bow.

We made it! We made it all the way across the Pacific Ocean and we didn't get hammered. 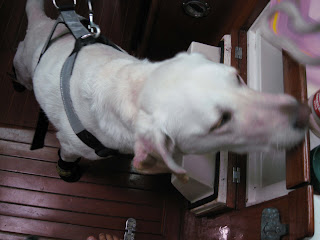 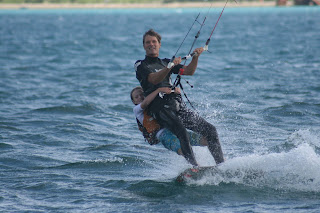 My dad is really good at kiteboarding and I've been watching him whizzing through the water all over the place. We talked about kiting together for a long time. I’ve always wanted to try it.

Finally, I got the opportunity. It was in Tonga, at Big Mama's beach. Tim surfed in and jumped off his board. 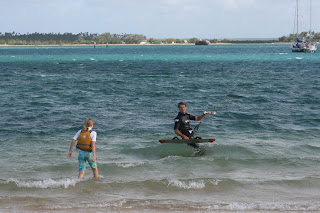 I climbed on his back. 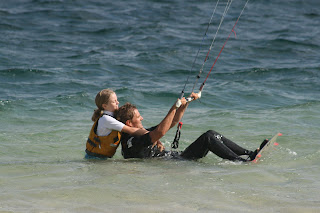 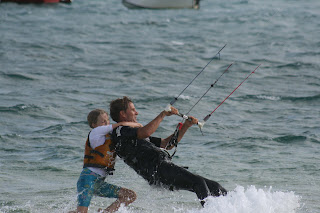 And then we zoomed through the water. 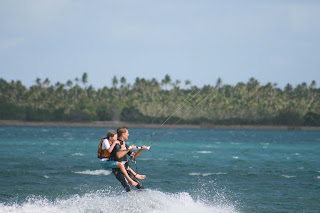 We experimented with me being in front of him and on the board, but the line connecting to the kite squeezed me. Then, we tried kiting with me standing on the back of the board, and that worked perfectly. What fun!

Here are some photos of Dad flying fast on the kite. He can jump super high. 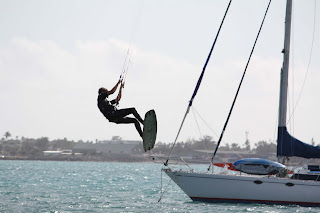 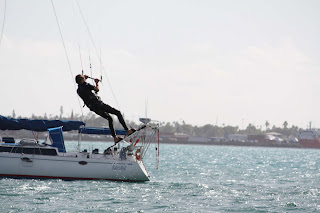 And he likes to show off. 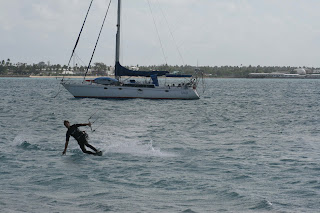 I can't wait to go again.