Since we've been in the land of Kiwi Birds, I wanted to share what I learned about this most unusual bird.

To start with, the Kiwi cannot fly, even though it has very small wing bones. Some people long ago doubted that the Kiwi even was a bird because their body temperature is 37- 38C, closer to a mammal than a bird and they have feathers that are more like fur.

The Kiwi’s lifetime is quite long. Their nostrils are on the very tip of their beak, which gives them a strong sense of smell. They can also hear very well.

Kiwi bones are filled with marrow, something that mammals have as well, making them heavier. They also have unusually long whiskers. In 1812, European naturalists first encountered the skin of a Kiwi and thought it was so odd they classified it as a penguin! Like the penguin, Kiwis can't fly.

There are 6 Kiwi species: 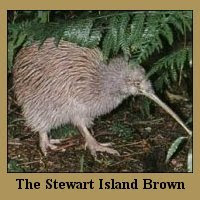 All of these birds require a delicate environment rid of predators to survive. But as is usually the case, people have interfered with the Kiwi lifestyle. First, the Polynesians came around 800- 1000 years ago, with Polynesian rats and dogs, major predators to the Kiwi. Then came another invasion, this time the Europeans 200 years ago. They brought cats, pigs, possums, hedgehogs, and worst of all, stoats, ferrets, and weasels.

Kiwis do have an interesting reproduction pattern that can help against introduced animals. You can’t exactly call it fast, though.

The female Kiwi has an egg that is 1/5 of her own weight. (If you were 100 pounds, you would have a 20 pound baby!) North Island Brown and the Little Spotted Kiwi lay two eggs each, the second four weeks after the previous and within the same season. North Island Brown and Rowi lay a second clutch later in the season, mid June to February. Female Rowi kiwis occasionally lay a third egg. 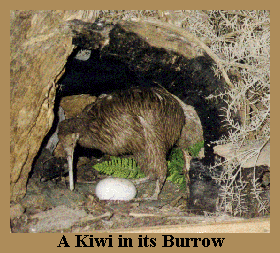 For these Kiwis, the male sits on the egg. But for the Great Spotted Kiwi and Southern Tokoeka, the parents take turns sitting on the eggs.

The most interesting fact, however, is that the Kiwi chick comes out of the shell fully feathered and open eyed, so it can mature quickly. Chicks venture out of the burrow at one week old, and at 10 days they may stay out the whole night. Something like this amazing feat, however, has several odd requirements. The egg is 60- 65% yolk, which is considered very high for a bird. Eggs need 80 days incubation, much more than most birds.

When incubating, the Kiwi does not go without food. Unlike most Kiwis, though, the Okarito Rowi never leave the nest unattended. Ordinarily, the parent leaves the nest for five hours a night. The Brown and Little Spotted cover the entrance with leaves and twigs. Some Little Spotted on Kapiti Island sometimes even disguise their tracks.

The size and weight of Kiwi eggs vary a lot, but it is approximately equivalent in size to six chicken eggs. Eggshells allow water out and oxygen in, but can also let harmful bacteria through. North Island Brown, Great Spotted, and Southern Tokoeka eggs weigh 430g when layed, as much as a pack of butter. For the same species, the eggs are 125mm long. The little spotted egg is 300g, and 110mm long.

Kiwis are very territorial and call out to trespassers and may fight them. Intruders might include Kiwi or other birds, but some Kiwis attack people and claw at their boots. Kiwis are very aggressive and have been known to beat up a possum.
But once two Kiwi form a pair, it is likely to last a few years if not for life.

Kiwis are omnivorous, eating plants and small insects. There are 178 species of worms for Kiwis to munch on. One giant worm is called Spenceriella gigantean, and can grow to the width of a garden hose, (imagine trying to eat that if you’re a Kiwi bird!) Kiwis not only eat worms, but also spiders, slugs, snails, centipedes, millipedes, and an array of other insects. They really love beetle larvae and moth caterpillars, yummy! Some even eat freshwater lobster and baby eels.

They are nocturnal because bugs venture out of their burrows at night. The only Kiwis that aren’t nocturnal are the female Steward Island Tokoeka, who must sit on their nest throughout the night. The Kiwi’s have a strong sense of smell because their nostrils at the tip of the beak (more extended than any other bird) assist it in finding food. And the whiskers, known as rectal bristles, act as sensory appendages all help the bird navigate in the dark. The Kiwi also has a sensory organ at the bill tip that detects tiny vibrations from forest floor invertebrates, a feature also found in wading birds. Plus, the long bill all make the Kiwi bird a very good forager.

Kiwis were probably called kiwi by the Maori because they resembled a bird from eastern Polynesia called the Kivi, (pronounced kee-vee) and the ‘v’ was replaced with a ‘w’.
Their ancestors are all from the Paleonath family which includes all the flightless birds, like the Tinamou, Moa, Elephant bird, Ostrich, Cassowary, and the Emu.

This image gives a good idea of where the different species of Kiwi are found:

The size of different species of Kiwi varies a lot. The Little Spotted Kiwis are the smallest at 25 cm tall, and some Great Spotted Kiwi and Brown Kiwi can be the size of a domestic hen, 45 cm.

The North Island and Haast birds have reddish to dark brown plumages.
Okarito Rowi are brown with grey tinges, they have white patches around the head, neck, and face and their feathers are streaked lengthwise, like all kiwi.

The Little Spotted Kiwi has a pronounced grey feathering as with the Great Spotted Kiwi, whose plumage is mottled or banded. 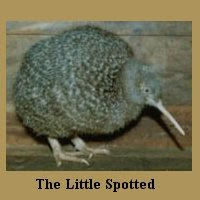 The Kiwi birds still have the remains of wings, and sleep with their head tucked under their waterproof feathers on their wings.

They have a preen gland (something full of oil) near the bird’s backside. They rub their bill up and down this area. It is thought that the oil refreshes the bill and feathers.

The beak is much longer on the female kiwi. For example, on the Stewart Island Tokoeka may reach 15 cm (6in) long. Brown kiwis have it several centimeters shorter.

If any of you bothered to read this, then I hope you will have learned something about the Kiwi birds of New Zealand.

All the pictures in this story were taken from 'The New Zealand Kiwi www.kamcom.co.nz' and if you are interested in Kiwis then please visit their website or even better, come visit New Zealand!

Maya, I read every word of your kiwi story and learned a lot. The kiwi is certainly an interesting creature. Do you know why the New Zealanders refer to themselves as Kiwis? Perhaps it's because they themselves take pride in being rather odd birds. Or is there a better answer? Love, Memaw

Hello, Dear!!!
I like this article because you present such an informative Kiwi Bird photos and facts.