August 4th. We really should have been sailing to Australia, as we had a perfect weather window. But we wanted to spend some time exploring New Caledonia and I didn't want to be at sea on my birthday because I thought it was bad luck. The last time we were at sea on my birthday was in 1995 when Ruth and I sailed our old boat, Capella, to Cartagena, Columbia and our mast fell down due to rigging failure. We managed to limp into Cartagena without a mast. The boat was a mess, covered in hydraulic oil. Well, somehow fate had oil wrapped as a birthday present this year as well. 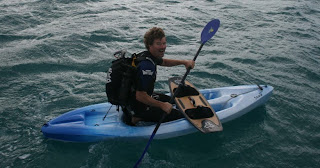 For my birthday we were in a small island, Ilot Maitre, just a few miles from Noumea, New Caledonia. The wind was strong ideal for a morning kiteboarding session. When I launched my kite at 8 in the morning, there were only two of us, by the afternoon more than 30 kiters cruised on the water. Well most of these French kiters weren't early risers. But they missed out, because I had the opportunity of kiting with a pair of dugongs. Dugongs are sea cows and look like a cross between ... a cow and a seal. 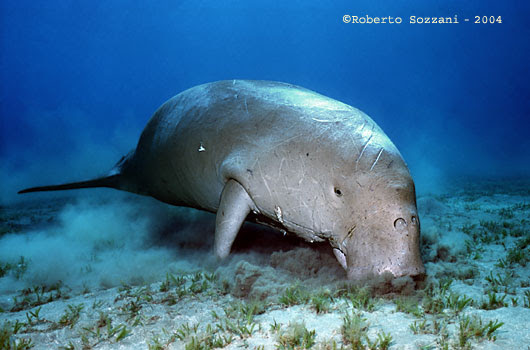 I tried to go slowly and quietly to get near them, but they were a bit shy and scared of my board. I kited near them for 5-10 minutes in shallow water...probably waist deep. They eventually swam off the edge of the reef into deeper water where I lost sight of them. Just before they dove into the deep the bigger one raised his head out of the water with his big long nose and gave me a long hard stare...was he curious, angry or did I interrupt a romantic moment? Maybe he was trying to warn me about the cruel fate in my near future.

The following day, we prepared to leave. We had just a few errands: buy French baguettes, cheese, TimTams (Kai's favorite cookies) and other groceries, check out of the country, and change the oil. Well as usual chores always take longer than you expect. By the time we arrived at the Capitaneria for check out it was 11:15am. The secretary said he was closed from 11am - 3pm for lunch (those French know how to live). But because we wanted to leave, she would do us a favor and see if the Port Captain would interrupt his lunch including his second bottle of wine and give us the formal stamp. The aged Captain shared a few sailing stories, gave us our clearance and returned to open his 3rd bottle.

So finally we returned to Kamaya for the last chore of changing the oil. I've always struggled at changing the oil without making a mess. The problem on a boat is, unlike a car, you can't just open the plug at the bottom and let it drain, because it will all end up in the bilge. So you pump it out the dipstick. I'm usually able to do this without too much mess, but then the oil filter always seems to drip a bit before I get it off. I've experimented with several variations and I thought I'd found the best one. This one involved a little help from Ruthy, which was the fatal flaw. She hadn't given me a birthday present yet and perhaps her mind was thinking about hot oil treatments and massages. Anyway, while I'm leaning into the engine compartment holding the oil pan and guiding the pump hose, she's carefully pumping the oil into a nearly full gallon container. Somewhow, well she's not really sure what happened, but suddenly the container leaped out and hot oil flew right onto my head. My screams of terror awoke the kids who snapped a few photos, but I don't think they really show my big mess and horror. As Maya said, "This might be grounds for divorce." 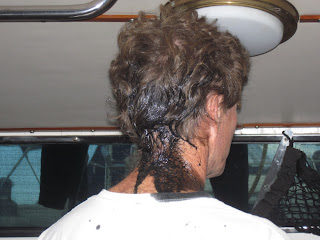 Well, it's probably very good for my dry skin, but I definitely won't be doing this again in a hurry. Maybe next year I'll get a massage treatment to go along with the hot oil for my birthday. Ruth promised to stay away from the engine, and now with a little distance, we can all laugh at my birthday present. So glad it wasn't as bad as my birthday in 1995 when we lost the mast. Cheers, Tim, the Tin Man with an oil overdose. 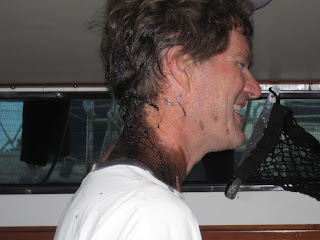 Well, a belated Happy Birthday Tim! You must have been pretty hot under the collar after Ruth dumped the oil on you! :)

Anonymous said...
This comment has been removed by a blog administrator.
September 6, 2011 at 8:55 PM