A catamaran has two hulls and its stern has steps leading down to the water. To get in or out of the dinghy, the crew just walks right down the steps. It’s an advantage, right?

Not so much in San Cristobal Island. Because, even though it is easy for people to get down the steps, it is just as easy for something else to get up the steps. On land they appear to be a lazy dog, and in the sea a playful porpoise.

There is a pair of tiny ears on the sides of their head, a dog-like nose, whiskers and two big innocent eyes. Let me introduce you to the Galapagos sea lion. 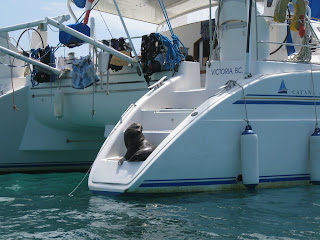 Sea lions climb up the steps of every catamaran possible. We heard all about this sea lion craze by radio from Stray Kitty, who anchored in San Cristobal before us. Stray Kitty is a catamaran so they were swarmed by sea lions the very night they arrived. 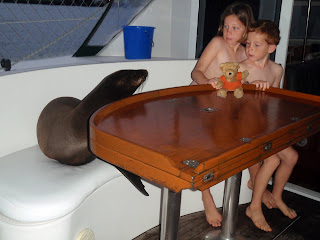 Cari, Ryan, and Andrea, the three kids onboard, decided to sleep in the cockpit. Cari slept on one bench, Ryan on the other bench and Andrea on the floor in between her younger siblings. Cari came down to sleep with Andrea. It began to rain and all three siblings went inside. Good thing, for in the morning, two sea lions were lying exactly where Andrea’s and Cari’s heads were, one where Cari had been sleeping and another sea lion where Ryan slept. Andrea claims she would have been squashed, But I don’t think the sea lions would get on top of her.

Anyway, we were told by Stray Kitty that under NO circumstances, should we take the dinghy into the dock. And they advised to call a water taxi. Soon we would find out why.

We sailed into San Cristobal, and let down our anchor. I was asleep. It was 4 am. When I woke up, the first thing I saw and heard was a sea lion.

I called a water taxi and we all piled in it. At the dock, four sleepy sea lions stared up at me. I walked up the walkway and gasped. There was a dinghy tied up with one ginormous sea lion inside it. So now I understand why we needed to take a water taxi.

On the benches near the beach, sea lions lay under or on top of the benches, relaxing. On the actual beach, mothers and pups milked and played in the water right next to the local kids who were also playing in the water. 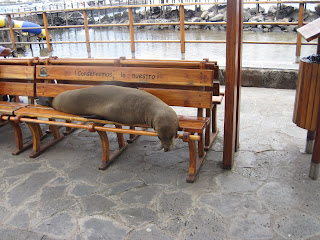 As we came back to the dock, several pups were pushing others off the steps and
chasing each other. We watched them until it was time to leave.

Stray Kitty went to Santa Cruz. Another boat, Tyee III, with two kids arrived. They’re also a catamaran and spent most of their evenings chasing away sea lions.

A few days later, we left for a second port in the Galapagos, Puerto Ayora on Santa Cruz Island. We stayed only one night in Santa Cruz, because it’s really rolly there, and my parents can’t sleep in rolliness. On the other hand, Kai, a heavy sleeper, slept in music going full blast, and in a London subway, standing up. I’m not as good as Kai, although a little rolly anchorage doesn’t bother me. But Mommy is the lightest sleeper ever. If she’s been in her bed for hours and you say hello, in a whisper, she’ll wake up.

So we moved to the third anchorage, Isla Isabela. The sea lions here don’t get on
occupied boats, but they love to swim around our boats and play with us. A few days ago, we snorkeled at Concha De Perlas near the muelle. I saw my first Christmas tree worm and on the way back, a mother sea lion played a few rounds of tag with us. I hadn’t seen a sea lion do that since Los Islotes.

This morning on the boat, two sea lions popped their heads out of the water into a standing position.

I can just sea dog in them.

Photo of Cari, Ryan and Andrea courtesy of Stray Kitty who is now en route to the Marquesas
By Maya - March 23, 2010

Gee, I guess we won't go there for now... you know being a catamaran and all!

Maya,
Thank you for the wonderful story about sea lions. They sound like critters who are sometimes a little friendlier than you might like. I wondered if you were giving us a little pun when you said that you can just sea (see?) dog in them. I guess maybe it's a good thing that dolphins don't have flippers because I'm sure they would want to come aboard too if they could. But they might be very interesting intelligent guest with good manners.
MMM

Wow Maya,
what a great story!
It must have been amazing to see those animals so close.