A Slice of our life in Isla Isabela

When you look at a map of the Galapagos, look for the biggest island, the one that resembles a sea horse sitting on a round rock. Put your finger on the southeast side of the rock and you’ll find us, anchored with six other boats near the town of Puerto Villamil.

We have penguins, sea lions, turtles and marine iguanas in our backyard. Three sea lions greet us every morning and do pirouettes around Kamaya looking for fish or just frolicking in the water. The little penguins also visit. From afar they look like black ducks, but close up you can see their large beaks, white bellies and black bodies. Though they can’t fly on land, they fly underwater in search for food. They can swim as fast as 25 mph. 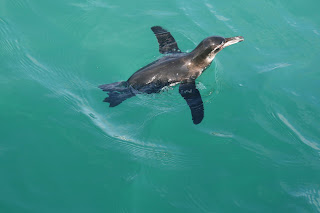 Last week just after we arrived, we were treated to a sunset feast of the birds. Hundreds of blue footed boobies living on the nearby lava beds flew over the anchorage looking for fish. Once they spot fish, the birds dive full speed into the water like kamikaze pilots on a serious mission. With so many birds flying into the water, the scene looks like a rainstorm. 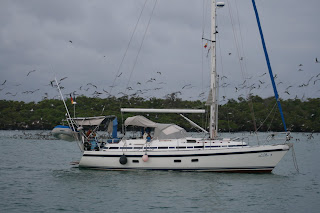 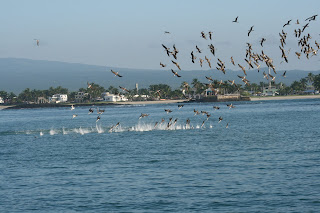 The pelicans and sea lions follow, but don’t move as quick as the boobies. Then the fish swim quickly away, fleeing for their lives and the birds follow them to another spot, hollering to their friends to join them and again dive deep for food. It’s amazing that they don’t catapult into each other. 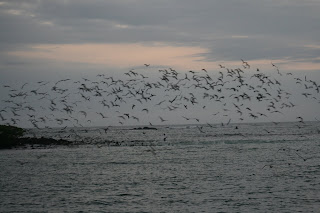 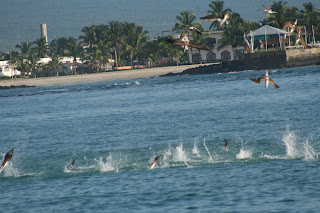 The icing on the cake is that there are three other families (all voyaging with catamarans), two from Canada and another from the United States, in the anchorage. It’s almost too good to be true as everyone gets along and we're having so much fun together exploring the island, swapping stories and being together. The nine kids have four different homes to knock on in search of play dates or food. 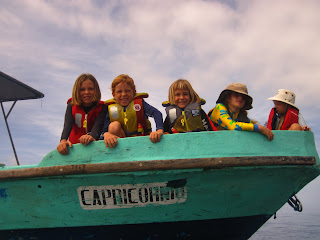 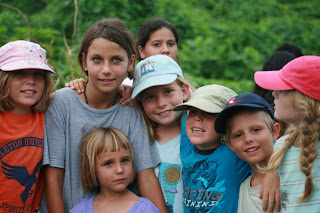 Every afternoon after boat school, the kids congregate on one of the boats and swim, kayak, snorkel or even water ski from one of the dinghies. Though a few days ago, the park service told us not to water ski because it’s a violation of one of the many Galapagos rules.

Yesterday, a huge supply ship arrived and the locals hauled bags of rice and beans, fresh fruit and cases of Pilsener beer to the shore. Someone ordered mattresses and those too paraded to the dock. When the supply ship comes, it feels like Christmas in March and I too am relieved, since our provisions from Panama are dwindling and it’s time to replenish. Fortunately, we've met a farmer, Romero who grows bananas, tomatoes, pineapples, carrots and papayas and there are also three bakeries in town. I was pretty worried when we first arrived since the stores looked barren, but now that we're figuring things out, we'll have more to eat than just rice and beans on our 25 day crossing to the Marquesas.
By Ruth - March 15, 2010

I wish I was one of your kids... How special to be in such a wonderful, incredible place and to have other kid boats on top of it!